In 1643, Dutch ship “Breskens” during her journey in the Pacific Ocean, the ship drifted to the Yamada Bay. The fishermen at Yamada Bay had compassion to show their hospitality to them.

Learning the tragic situation with the Tsunami on March 11, , 2011, Dutch companies in Japan and other Dutch related organization showed strong intention to support Yamada-Machi for it’s revive and reconstruction. After more than 360 years of the hospitality shown to the Dutch people on Breskens, we will return the gratitude to the people and children in Yamada-machi.

It was already 5 years ago that we, Oranda Jima Foundation, donated the after-school house “Oranda-Jima House” to Yamada Machi.

Yamada Machi held the 5th Anniversary of the Oranda-Jima House and together with children of around 35 and those who supported Yamada Machi were invited to join this special event.

Thank you for your support towards Yamada Machi, Iwate. 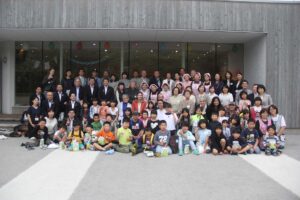