After the first visit to Yamada Machi (28 April, 2011), Oranda Jima Foundation members – togther with members of Welfare & Health Department of Yamada Machi town hall,  Yamada Machi Rotary Club,  Yamada Machi Japan-Netherland friendship club – have been discussing and exchaning ideas how to support children in Yamada Machi towards recontsruction.  We learnt that after the mega-Tsunami, the transportation was the earnest thing to seure for people and children to go to hospital, school, daily shopping etc particularly for those who are at the temporary housing.

This made us to decide to make urgent assistance of donating the minibus to the town.  The arrangement was well taken care by Rabobank, Taimatsu Car Option, and Dick Bruna Japan for the Miffy Logo.

During the process of this project, we received many voluntary support from various companies and people.  The miffy bus is not a brand-new car but it is full of passion of those who had dealt with this project.

We sincerely hope that the Miffy bus will take children and people in the town and beome their good transportation means. 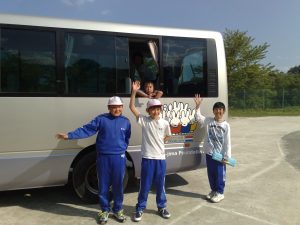 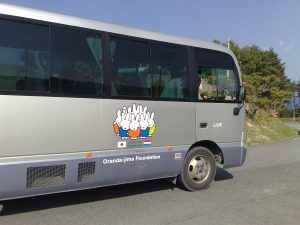